I am hadrien, I went touring between France and Turkey in 2015 ( http://vibesharing.com)

I am going back on the road in May in South Korea to cycle through the amazing 4 rivers cycle path. (https://sites.google.com/site/wanderingwills/4-rivers-bike-path)
I didn't see much litterature about it, if you can give me some advices about:

If some of you are in Seoul at this time I would be glad to take a coffee or a dinner and chat about it too, I am staying in the Itaewon area. 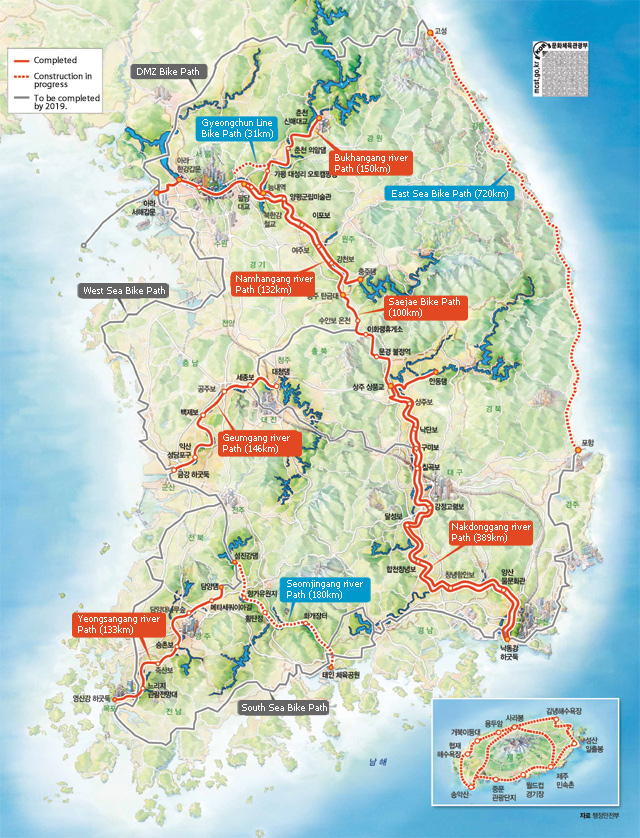 Hello! Enjoy your ride and read

Good evening. Mr.buret.
Welcome to korea. If you want to know about 4 river cycle path,
1. After Paldang bridge, you can see a lots of place for camping. it is not permitted places but it is fine. a lots of korean also sleeping same places.
2. if you have a chance, you should fill the water on your bottle after pass seoul area. a few convenience store you can see after seoul.
3. Sejong bike path area is most hilly place from incheon to busan. you can see '이화령휴게소' on this map. that place is the most highest place from incheon to busan.
4. mosquitos ??? after may, june you can see.
5. i don't live in seoul. if you need addictional information, please visit 'bikely'. this shop is the most famous place for bicycle traveller in korea.
you can get a lots of information more than me. you can search at google map.

Thanks to read and enjoy your ride.

Thanks for these details !
This Bikely shop looks like an awesome place where to begin my bike related trip in South-Korea, I'll try to get there by the end of the week and I will you give you some feedbacks too!.

Do you know a bit more about how achieved is this east cycle path between busan and the north Korean border?
This is the most recent news in english I could find, maybe in korean you have more recent news about it
(http://www.cyclingcorea.com/home/category/east-coast-route)

In korea, east cycle path is very famous place before goverment makes public cycle path.
anyway, public cycle path between busan and north korean border is now completed. but only from Uljin to gang-gu. (+82km)
as you can see at URL above u attached, from observatory to Imwon beach is already completed before 2017.
This month, Uljin to Gang-gu public cycle path is completed and relational department saids this is the end of public cycle path.
south-east side No.7 road and harbor is very very overcrowed and heavy traffic. So it is not safe for riding. because of that, they stop built
east cycle path more than gang-gu.
If you aim to get stamp rally, you can go to gang-gu and ride until observatory. this is the end of trai on east coast route.
but i highly recommend start from busan to North korean border.

I want to ride these paths in the coming few years too.

There is a member that will start their trip just 3 days later.
Maybe you could say hello to them and exchange information.

Thank you very much, this

Thank you very much, this will help me in my journey as they prepared this a bit more professionaly than me ^^.
I hope they will feed their facebook page too.!

We cycled from Busan up to

We cycled from Busan up to Incheon following the cycle path almost the whole way in 2015 as part of our current Japan - UK ride.

Sleeping anywhere along the path is very easy. There are frequent rest areas and lots of shelters along the path where you'll have no problem pitching a tent. There are a few official campsites too which are very well equipped. We did it in October, and the morning mist in the river valleys meant a very wet tent in the mornings.

There are water fountains and toilets at the rest areas and plenty of convenience stores, especially closer to Seoul. Pick up a map at one of the start points of the cycle path, and the facilities are well marked.

It's generally quite comfortable riding and easy to ride those kind of distances every day. There is one pass to the north of Jeomchon but the gradient is quite mellow. There are some sections south of that which are ridiculously steep, but are short and sharp, so over quite quickly. Just poorly designed sections which should have zigzagged up the slope, but instead took a direct route straight up.

We didn't have any problems with mosquitos, as far as I remember.

There's more info on our blog from that section of our trip:

Feel free to contact me if you want any more details.

There's also a Facebook page https://www.facebook.com/Korea-by-Bike-KBB-607037326068398/ which is run by a guy called Brad Kirby. He's really knowledgeable and very helpful. He really did go out of his way to give advice and route info when we contacted him via Facebook.

I did the 4 arivers bike path

I did the 4 arivers bike path a couple of years ago and thought it was wonderful.I free camped all the way along, usually near a public toilet so I had water and somewhere to charge up my phone.I never has any hassles or felt threatened.The 4 Rivers is one of the best kept secrets in world cycling, and I would recommend it to anyone

Facilities along the way

are there any shower facilities along the way? Or any campsites you can stay in?

I free camped all the way through Korea, and don’t actually recall seeing any proper campsites.I usually washed myself in the public toilets I always camped near.You can swim in some of the rivers,depending in the condition of the water.If you camp in public parks , nobody bothers you, and Korea has to be one of the safest countries in the world, along with Japan.

I see. Thank you very much

I see. Thank you very much for your message. One more thing, did you take your bike by bus? The thing is I want to start in Incheon go to Busan and on my way back take a bus.

For go to incheon, you have a 2 option.

And after reach to incheon, take bus agaion to incheon airport bus station.

It is different with 'Sa-sang bus terminal'. and take bus go to incheon-air port.

If you want to take a bus going to 'incheon-air port' and heavely loaded traveller, You must be choice early one.

Maybe Space is not enouch for your bike.

After Busan I caught the

After Busan I caught the overnight ferry to Japan, so didn’t go back to Incheon.There is a great train network, just watch out for zombies on the Busan train ( Korean zombie film reference)If you are arriving at Incheon airport, they don’t like you putting your bike together in the airport and then on the train, although I did it.You can’t cycle out of the airport, so you have to take the train

Hadrien buret, how was your South Korean cycle adventure?

I realise this is a little late for your adventure, but perhaps it may help someone else.

I completed a 5-week cycle tour around South Korea in July and August 2016. I divided the tour into five stages: Seoul to Sokcho via Chuncheon (to hike Daechongbong, Seoraksan), Sokcho to Busan (via the East Sea Bike Path), around Jeju (to hike Hallasan), Yeosu to Gurye (to hike Cheonwangbong, Jirisan), and Gurye to Seoul (via the Four Rivers Cycle Path by way of Jinju and Daegu).

I have never felt so comfortable wild camping. I had only two problems wild camping in South Korea. First, there's not so many grassed areas to pitch a tent on, so a free standing tent or a bivi bag would be advantageous. Along the east coast, I camped on the beach (although tsunami's are a risk) and in the mountains I camped on river banks. Second, while I thought I'd done my homework about dangerous animals, I hadn't been aware that Korea had pit vipers. So, my first few nights' sleep after finding out were somewhat broken. In the end, the only pit vipers I saw were the dead ones I passed on roads.

South Korea has a very high concentration of public toilets, which often come with running water, toilet paper and music. I filled my water bottles up from clean looking toilet sinks, after letting the water run through for a few seconds or so. Initially I used purification tablets. However, as I was drinking upwards of 6 litres of water a day (excluding water I cooked with), I gave up on the tablets and just drank the water straight. I would also stop at fuel stations and ask to fill my water bottle, which was always accepted.

While I wouldn't change anything about my tour, it was the way it needed to be for me, I would recommend cycling the East Sea Bike Path from south to north in July and August, rather than from north to south. First, the trade winds were blowing north. So, the entire distance from Sokcho to Busan involved cycling into monsoon season winds and - as this was the coast - I had no hills to hide behind. Second, the temperatures often exceeded 35C. I have never sweated so much. I was that person in the grocery store that smelt distinctly of urea, even I could smell it.

Jimjilbangs, sauna facilities where you can also sleep, are a cycle tourist's dream: seemingly endless bathtime with a place to sleep for less than hostels. I found Jimjilbangs in all reasonably sized towns throughout South Korea, although this sometimes involved rooting around industrial estates. While the floors were hard, this was a pleasant contrast to being in the saddle.

In terms of routes, I didn't take a GPS or smart phone device, instead I relied on a 1:250,000 map of the country and regular road signs. The stretch from Chuncheon to Sokcho was extremely sketchy in parts, as it involved cycling with large vehicles through several single-lane mountain tunnels. The East Sea Bike Path became a test of endurance given the winds and tempatures, but the coastline (especially in the north) makes for good beach photos. On Jeju, the attractions I had read so much about in advance I felt were vastly oversold, but the interactions I had with people on Jeju were among the most rewarding of the whole tour. However, the jewel in my tour was cycling and hiking through Jirisan national park. South Korea's mountains don't win any prizes for elevation, but they rise from near sea level straight up and are drapped in amazing forests and offer stunning ridge walks. For the most part, the Four Rivers Cycle Path is relatively flat and straight, and - as it's recently been developed - the vegetation hasn't yet had a chance to recover. Though the pass near Mungyeong offers a good climbing challenge, and the final day's ride into Seoul is picturesque and pretty much brought me to tears. Unfortunately, I didn't explore the west of the country, which a couple of other cyclists I met strongly recommended.

Before starting out, I had been vaccinated for Japanese encephalitis, but I never had any problems with mosquitos. I slept inside a mosy net, but never needed to use any sprays during the day.

I would highly recommend South Korea, especially for it's people, landscape and food. While South Korea is signficantly more expensive than most other cycle tour destinations, wild camping and vegetarian self-cooked meals can help keep the budget under control.

Sorry I double posted and don't know how to delete this comment, but I can at least make it small.